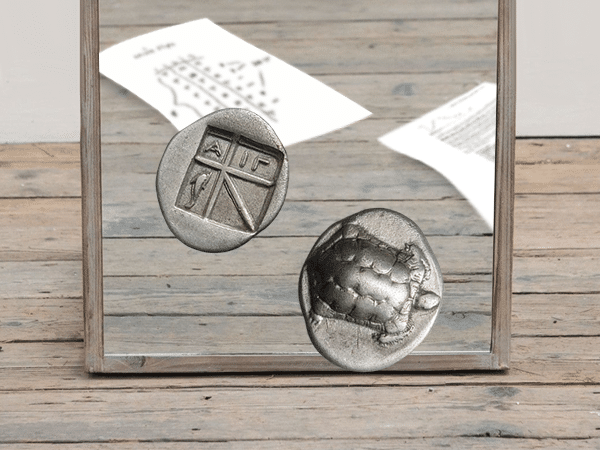 Mathematically, this is expressed as:

But think about it. Have you ever bothered to check if heads and tails are really equally likely outcomes for the coins you flip? Actually, no real coin is truly fair in that sense. One side is always slightly heavier or bumpier than the other. This biases the coin away from the ideal 50/50 ratio of heads and tails.In fact, the coin flipping process itself can slightly skew even an ideal coin’s outcomes. In their SIREV paper, authors Persi Diaconis, Susan Holmes, and Richard Montgomery analyze the math and physics behind the process of coin flipping. Here’s an excerpt from their abstract (you can find the original pdf here):

We analyze the natural process of flipping a coin which is caught in the hand. We prove that vigorously-flipped coins are biased to come up the same way they started. […] For natural flips, the chance of coming up as started is about .51.

Whether this kind of a bias is a problem in the real world is a separate question. However, if you decided to gamble on coin flips, you can be sure it will have a dramatic effect on your long-term wins when the number of flips grows significantly. For example, if a coin comes up heads with probability 0.51 (instead of 0.5), after 10000 flips the expected number of heads is going to be 5100. This is 100 more than the expected number of a perfectly unbiased coin.

Okay, maybe you don’t ever intend to gamble with coins. And you don’t care if any coin is biased or not. However, thinking about the process of estimating a coin’s bias is very useful in itself. You can apply analogous methods to all sorts of problems that you do care about.

In this post I’m going to show a way of estimating the bias of a coin using Bayes’ theorem. The method relies only on empirical data collected by flipping the coin multiple times. It isn’t concerned with any of the physics behind individual flips.

Instead of flipping a real coin and reporting its outcomes, I’m going to simulate coin flips with the programming language MATLAB. I’m not going to discuss any of the code here but if you’re into programming you can download it and run your own simulations. You don’t need to be into programming to be able to follow the rest of the post, however.

In the actual simulation, I’m going to use Bayes’ theorem to recalculate the estimate of a coin’s bias after every flip. But before I do that, I’m going to introduce the concept of probability distributions which is going to be helpful along the way.

For a deeper introduction to probability distributions, check out my post dedicated to this topic.

Think about the die rolling example again. Assuming the die is perfectly unbiased and each outcome is equally probable, you divide the total probability (1) to six equal parts and the probability of each outcome becomes 1/6: 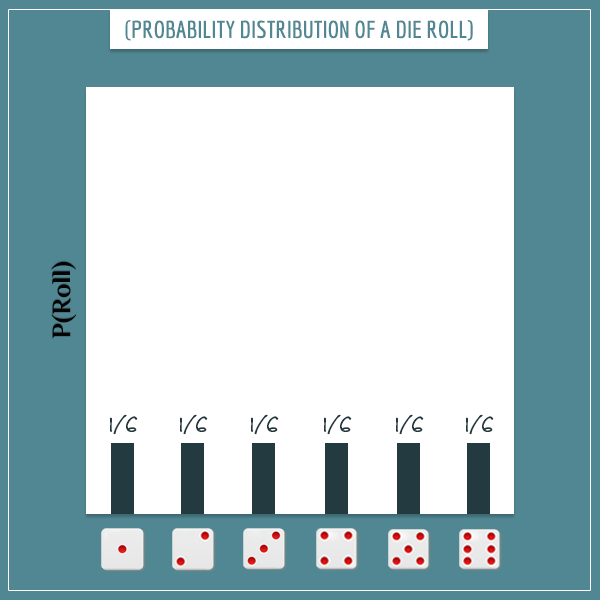 A random process can have any number of possible outcomes. A probability distribution only requires that the sum of all probabilities adds up to 1 — neither more nor less. This suggests that anytime you adjust the probability of one outcome, this will be “at the expense of” the probability of at least one of the other outcomes.

For example, if it turns out that the die is unfairly biased to come up 6 with probability 0.4 (instead of 1/6), the remaining 5 outcomes only have a total probability of 0.6 to distribute among each other.

The bias of a coin

In this section, I’m going to illustrate the last concept with a simulation. However, instead of a die, I’m going to use a coin because having only two possible outcomes will make calculations much simpler.

Most coins are close to being fair. That is, they have the same probability of landing heads and tails (0.5). You can talk about the bias in terms of only one of those probabilities.

There are only two possible outcomes and the other probability has to be 1 minus the first. Therefore, specifying the bias of a coin actually specifies the entire probability distribution. This distribution is called the Bernoulli distribution. If you want to learn more about it, check out my post dedicated to it.

From now on, I’m going to measure the bias as the probability with which it lands heads:

With the above definition, a fair coin is one for which Bias = 0.5. Most coins may not be perfectly fair but their bias is still very close to 0.5 and deviations are hard to detect “with a naked eye”.

Imagine that there’s this special coin factory which produces coins having all sorts of biases. Meaning, if you pick a random coin from the factory, its bias can be any number between 0 and 1.

But to make things even simpler, assume that the possible biases are only the 101 discrete values between 0 and 1:

You have no reason to assume that a randomly picked coin is more likely to have any of the 101 values compared to the rest. Therefore, you start your estimation of the bias by assigning it a uniform prior distribution: 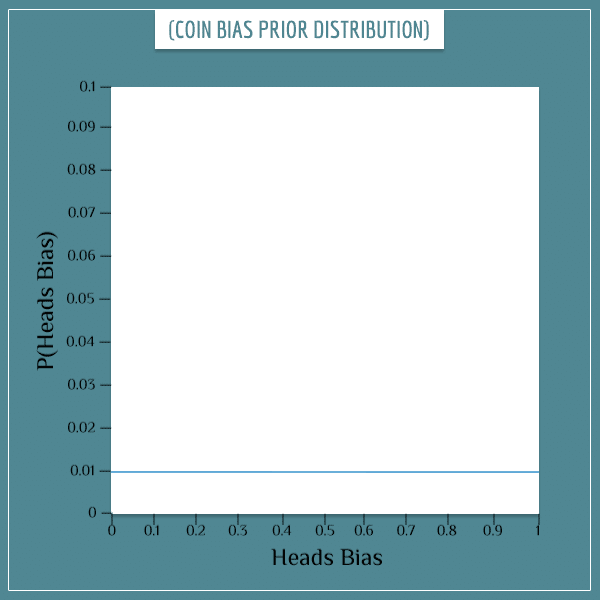 In order to not clutter the x-axis too much, I didn’t put all possible bias values in its label. But the blue line you see in the plot is supposed to be a series of 101 dots positioned very close to each other. The height of each dot (the y-axis value) represents the prior probability of the corresponding “Heads Bias” value.

In this case, the probability of each bias is 1/101 (this follows from the requirement that the probabilities in any distribution must add up to 1). Calling the prior distribution uniform is another way of saying that all biases are equiprobable.

Parameter is a term in probability theory used for referring to characteristics of a system, such as the bias of a coin. A parameter is simply a feature or a property of the system.

Parameter estimation is inferring the value of a parameter from new data about the system (read more in my post on Bayesian vs. Frequentist approaches to statistics).

Say someone randomly drew a coin from a pile produced by the factory. The coin’s bias happens to be:

Let’s get down to business. See what happens to the posterior distribution after the first 500 flips (click on the image to start the animation): 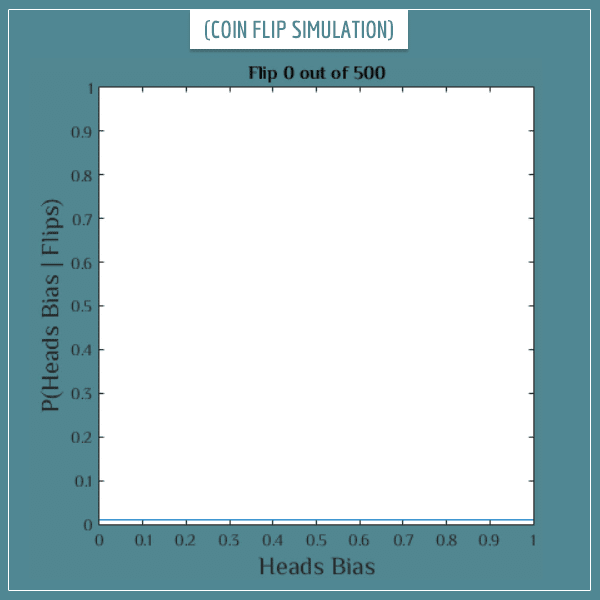 So, after 500 flips most of the probability gets distributed around the value 0.3. In fact, the probability for most other values virtually disappeared — including the probability of the coin being fair (Bias = 0.5). This already is a pretty good estimate of the real bias!

But you might want an even better estimate. If you’re really determined to find the true bias of this coin, you can continue flipping it.  Just keep flipping until you’ve reached the precision that satisfies your goals. See what happens after a set of 15 000 additional coin flips (again, click on the image to start the animation): 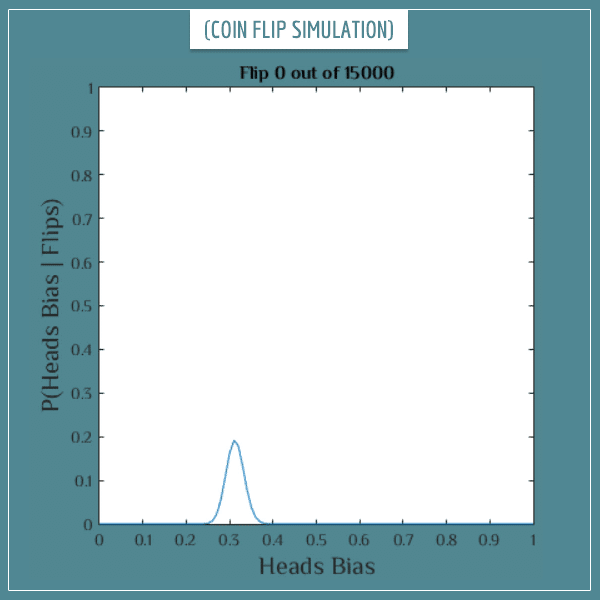 Well, now you can be almost certain the bias is either 0.3 or some value very close to it! You see that, as you accumulate more data in the form of coin flips, you get closer and closer to the real bias of the coin.

Now it’s time to dig into the details of the simulation.

As I said in the beginning, you can download the code for this simulation and run it yourself with different values for the coin bias parameter. The code is written in MATLAB and is only 30 lines long. Here’s what it does:

There are also a few code lines that dynamically plot the updated probabilities (like the animated plots you saw in the previous section). Now the only thing left to explain is Step 4.

Updating the prior probability distribution with Bayes’ theorem

If you haven’t already, I suggest you take a look at my post explaining the intuition behind the rule. It’ll help you understand any parts from this section you potentially get stuck on. Also, you can take a look  at another post where I show all the steps of the calculations with another example.

So, this way you calculate the posterior probabilities for all values between 0 and 1. Then you flip the coin again and repeat the calculations but this time with the posterior distribution as the next prior distribution. As you collect more data, your estimate of the bias will get better and better and you can get arbitrarily close to the real value.

Well, as long as you have motivation to continue flipping the coin.

In this post I introduced two new concepts from probability theory:

In particular, I demonstrated the use of Bayesian parameter estimation. Even though estimating the bias of a coin is a very simple problem, once you intuitively understand the technique, the generalization to more complicated problems isn’t difficult.