Say you wanted to find the average height difference between all adult men and women in the world. Your first idea is to simply measure it directly. The current world population is about 7.13 billion, of which 4.3 billion are adults. Would you measure the individual heights of 4.3 billion people? I didn’t think so. It’s impractical, to say the least. 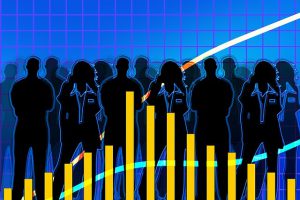 A more realistic plan is to settle with an estimate of the real difference. So, you collect samples of adult men and women from different subpopulations across the world and try to infer the average height of all men and all women from them.

And this is how the term inferential statistics gets its name. You have a population which is too large to study fully, so you use statistical techniques to estimate its properties from samples taken from that population.

If you want a little more background on the distinction between samples and populations, please read this section of my post related to probability distributions.

In special cases, you might simply want to know whether a pattern or a difference exists at all. You don’t have to care about the specifics like the exact magnitude of a difference between two groups. In those cases, the simplest inference technique you can use is sometimes jokingly called the interocular traumatic test (IOTT). You apply this test when the pattern is so obvious that it hits you right between your eyes!

For example, if you’re comparing the annual salary differences between company CEOs and company janitors, you won’t need to be that skilled in statistics to conclude that there is a big gap between the two.

As you can imagine, the IOTT has very limited applicability in the real world. Many differences are much too subtle to detect in such direct ways. Not to mention that most interesting patterns aren’t answerable by simple “yes/no” questions. People have developed many statistical techniques to deal with these complex cases.

The 3 goals of inferential statistics

In inferential statistics, we try to infer something about a population from data coming from a sample taken from it. But what exactly is it that we’re trying to infer?

All methods in inferential statistics aim to achieve one of the following 3 goals.

In the context of probability distributions, a parameter is some (often unknown) constant that determines the properties of the distribution.

For this goal, you usually need to already have estimated certain parameters. Then you use them to predict future data.

For example, after measuring the heights of females in a sample, you can estimate the mean and standard deviation of the distribution for all adult females. Then you can use these values to predict the probability of a randomly chosen female to have a height within a certain range of values.

Assume that the mean you estimated is around 160 cm. Also assume that you estimated the standard deviation to be around 8 cm. Then, if you randomly pick an adult female from the population, you can expect her to have a height within the range of 152 – 168 cm (3 standard deviations from the mean). Heights that deviate more from the mean (e.g., 146 cm, 188 cm, or 193 cm) are increasingly less likely.

I am briefly mentioning this goal without going into details because it is a somewhat more advanced topic which I will cover in others posts (for starters, check out my post on Bayesian belief networks — a method for belief propagation that naturally allows model comparison).

In short, model comparison is the process of selecting a statistical model from 2 or more models, which best explains the observed data. A model is basically a set of postulates about the process that generates the data. For example, a model can postulate that the height of an adult is determined by factors like:

A statistical model would postulate a specific relationship between these factors and the data to be explained. For example, that genetic components influence height more than physical exercise.

Two models may postulate different strengths with which each factor influences the data, a particular interaction between the factors, and so on. Then, the model that can accommodate the observed data best would be considered most accurate.

Frequentist and Bayesian statistics — the comparison

The differences between the two frameworks come from the way the concept of probability itself is interpreted.

Overview of frequentist and Bayesian definitions of probability

In an earlier post, I introduced the 4 main definitions of probability:

In short, according to the frequentist definition of probability, only repeatable random events (like the result of flipping a coin) have probabilities. These probabilities are equal to the long-term frequency of occurrence of the events in question.

Frequentists don’t attach probabilities to hypotheses or to any fixed but unknown values in general. This is a very important point that you should carefully examine. Ignoring it often leads to misinterpretations of frequentist analyses.

In contrast, Bayesians view probabilities as a more general concept. As a Bayesian, you can use probabilities to represent the uncertainty in any event or hypothesis. Here, it’s perfectly acceptable to assign probabilities to non-repeatable events, such as Hillary Clinton winning the US presidential race in 2016. Orthodox frequentists would claim that such probabilities don’t make sense because the event is not repeatable. That is, you can’t run the election cycle an infinite number of times and calculate the proportion of them that Hillary Clinton won.

For more background on the different definitions of probability, I encourage you to read the post I linked above.

For more background on this section, check out my introductory post on probability distributions.

How would a frequentist approach this problem? Well, they would reason as follows:

I don’t know what the mean female height is. However, I know that its value is fixed (not a random one). Therefore, I cannot assign probabilities to the mean being equal to a certain value, or being less/greater than some other value. The most I can do is collect data from a sample of the population and estimate its mean as the value which is most consistent with the data.

A Bayesian, on the other hand, would reason differently:

I agree that the mean is a fixed and unknown value, but I see no problem in representing the uncertainty probabilistically. I will do so by defining a probability distribution over the possible values of the mean and use sample data to update this distribution.

In a Bayesian setting, the newly collected data makes the probability distribution over the parameter narrower. More specifically, narrower around the parameter’s true (unknown) value. You do the updating process by applying Bayes’ theorem: 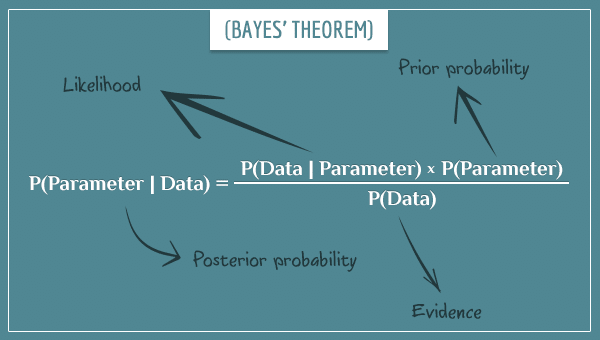 The way to update the entire probability distribution is by applying Bayes’ theorem to each possible value of the parameter.

If you aren’t familiar with Bayes’ theorem, take a look at my introductory post, as well as this post. They will give you some intuition about the theorem and its derivation. And if you really want to see the use of Bayes’ theorem in action, this post is for you. There, I demonstrated the estimation of the bias of a coin by updating the full probability distribution after each coin flip.

Frequentists’ main objection to the Bayesian approach is the use of prior probabilities. Their criticism is that there is always a subjective element in assigning them. Paradoxically, Bayesians consider not using prior probabilities one of the biggest weaknesses of the frequentist approach.

Although this isn’t a debate you can answer one way or another with complete certainty, the truth is not somewhere in the middle. In the future, I’m going to write a post that discusses the mathematical and practical consequences of using or not using prior probabilities.

Here, the difference between frequentist and Bayesian approaches is analogous to their difference in parameter estimation. Again, frequentists don’t assign probabilities to possible parameter values and they use (maximum likelihood) point estimates of unknown parameters to predict new data points.

Frequentists don’t treat the uncertainty in the true parameter value probabilistically. However, that doesn’t magically eliminate uncertainty. The maximum likelihood estimate could still be wrong and, in fact, most of the time it is wrong! When you assume that a particular estimate is the correct one, but in reality it isn’t, you will make an error. Consequently, this has lead to the development of two mathematical techniques for quantifying and limiting long-term error rates:

The general idea is to make an estimate, then assume something about the estimate only under certain conditions. You choose these conditions in a way that limits the long-term error rate by some number (usually 5% or lower).

Put yourself in the shoes of a person who’s trying to estimate some mean value (the average height in a population, the average IQ difference between two groups, and so on). As usual, you start by collecting sample data from the population. Now, the next step is the magic that I’m not telling you about. It’s a standard procedure for calculating an interval of values.

You determine the whole procedure, including the sample size, before collecting any data. And you choose the procedure with the following goal in mind.

In statistics, commonly used ones are the 95% and the 99% confidence intervals.

If you choose a population with a fixed mean, collect sample data, and finally calculate the 95% confidence interval, 95% of the time the interval you calculated will cover the true mean.

Click on the image below to start a short animation that illustrates the procedure I described above:

Somewhere on the real number line, we have a hypothetical mean (abbreviated with the letter ‘m’) . We generate 20 consecutive 95% confidence intervals. Two of them happen to miss the mean, and 18 happen to cover it. That gives 18/20 = 90%.

By the way, notice how individual confidence intervals don’t have the same width and they are all centered around different values.

In this post, I introduced the distinction between descriptive and inferential statistics and explained the 3 goals of the latter:

I ignored the last goal and mostly focused on the first.

I showed that the difference between frequentist and Bayesian approaches has its roots in the different ways the two define the concept of probability. Frequentist statistics only treats random events probabilistically and doesn’t quantify the uncertainty in fixed but unknown values (such as the uncertainty in the true values of parameters). Bayesian statistics, on the other hand, defines probability distributions over possible values of a parameter which can then be used for other purposes.

Finally, I showed that, in the absence of probabilistic treatment of parameters, frequentists handle uncertainty by limiting the long-term error rates, either by comparing the estimated parameter against a null value (NHST), or by calculating confidence intervals.