Before getting to the details of sample spaces, I first want to properly define the concept of probabilities.

By the way, if this is the first time you’re seeing this notation, you might want to take a look at my introductory post on Bayes’ theorem, where I also introduce a few basic probability theory concepts. In this section, I am going to define probabilities in a slightly more formal way. For that, I am going to assume you have either read my post or have a basic understanding of events, probabilities, and conditional probabilities.

What do these axioms mean?

Earlier, I mentioned the requirement for probabilities to be numbers between 0 and 1. Notice that this is actually a consequence of the first two axioms. The third axiom is intuitive, because you would expect to get 1 after adding the probabilities of all non-overlapping events in the sample space, since they cover the entire set of possible outcomes.

Of course, the full list of consequences of these axioms is quite long and includes all theorems in probability theory (one of the big names in the list is, of course, Bayes’ theorem).

In case you’re wondering how to interpret the fact that these statements are axioms, think about it this way. In order for a set of measures to be probabilities (in the mathematical sense), they need to comply with these three statements. So, the role of the axioms is to basically mathematically distinguish probabilities from non-probabilities.

For a more detailed discussion on the meaning of probabilities, check out this post.

Imagine a creature which has one special power: given any set of options, it can select one of them in a perfectly unbiased and unpredictable manner.

For example, if you give the creature 5 boxes and ask it to open one of them, the creature will make its choice with no inclination towards any of the boxes. In fact, its decisions are so unpredictable that even the creature itself never knows what they will be before they are actually made. I’ll call this creature Random (you never saw this coming, did you?).

What’s special about Random is that I can use him to build a metaphor for representing processes with probabilistic outcomes. Imagine that Random’s entire existence consists of choosing points on a square whose area is equal to 1: 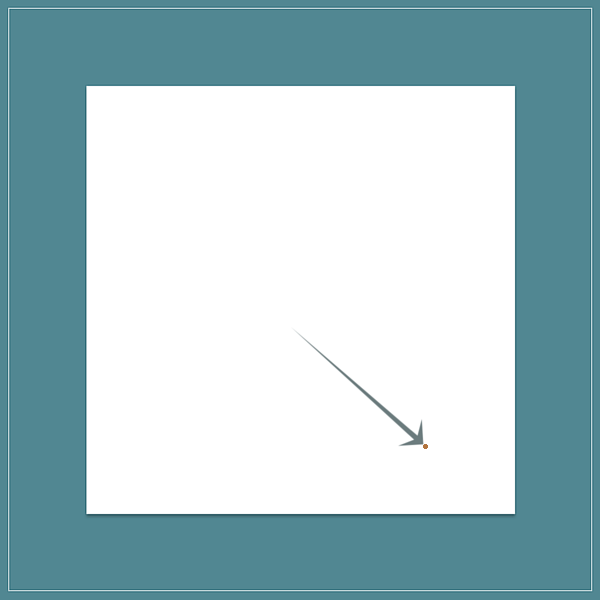 So, Random’s job is choosing points on this square. That’s it. But remember, every time he picks a point, his pick is completely… random. He has no memory of his previous choices. Also, no point on the square has any privilege over the others.

But what does this metaphor have to do with probabilities?

Imagine that the square is divided into separate regions. Each region represents some set of outcomes of the random process. For example, any process with two equally probable outcomes can be represented by dividing the square in two parts with equal areas.

An example of such a process is flipping a fair coin: 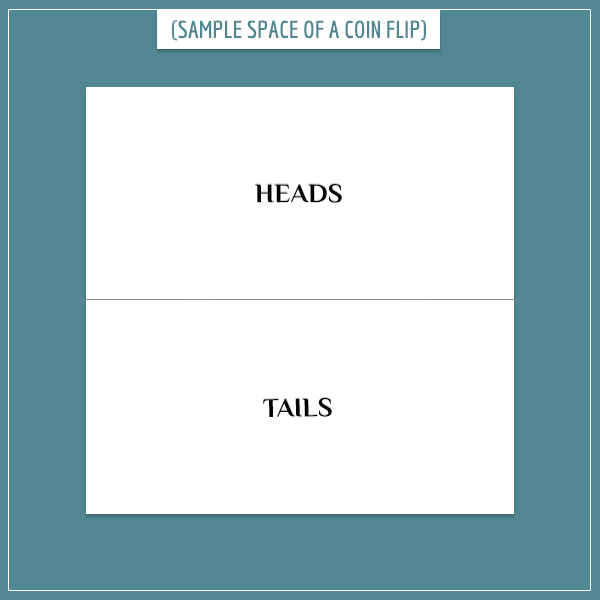 Let’s continue with the metaphor. When you flip the coin, Random’s choice of a point on the square determines the outcome. If the selected point happens to be in the upper half of the square, the coin lands heads; otherwise it lands tails. Notice two things about the areas representing the events “Heads” and “Tails”:

Consider two other examples. The first one is the sample space of rolling a fair die: 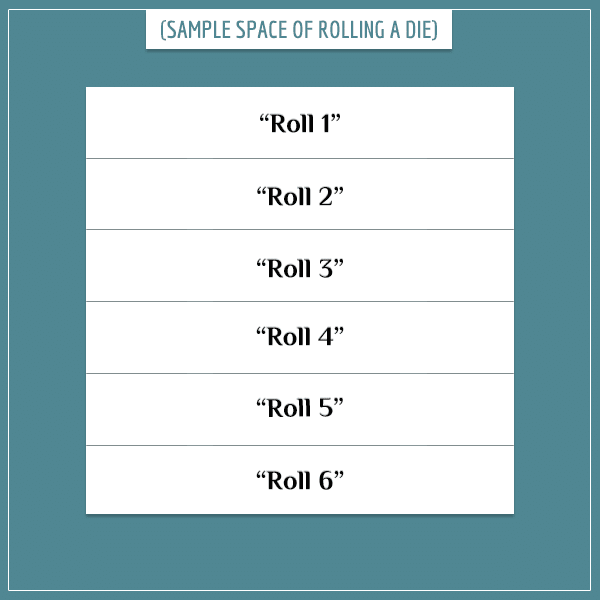 Again, the square is divided into equal parts which represent the probabilities of the 6 possible outcomes. Each outcome’s probability is then equal to 1/6.

The second example is the sample space of randomly drawing a card from a 52-card standard deck: 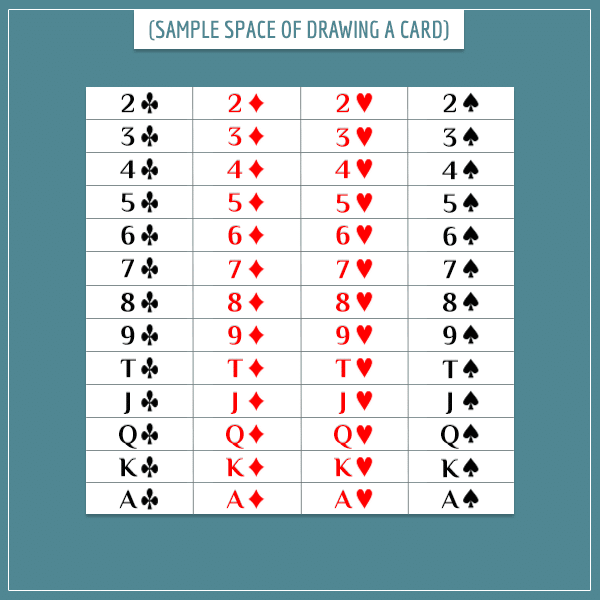 This time the square consists of 52 equal parts, each representing a different card from the deck. Therefore, the probability of drawing any one card is 1/52.

To get a better intuition about this assignment of probabilities, check out my introductory post on probability distributions.

Okay, if you managed to follow things so far, you already have a good feeling of sample spaces. One final topic I want to cover in this section is conditional probabilities and how they relate to sample spaces.

So far I haven’t said anything about the distribution of rainy/dry days among days with cloudy/sunny mornings. In other words, I haven’t specified any of the conditional probabilities, like P(“Rainy Day” | “Cloudy Morning”). I will pick a particular distribution by graphically illustrating the joint sample space of the two events: 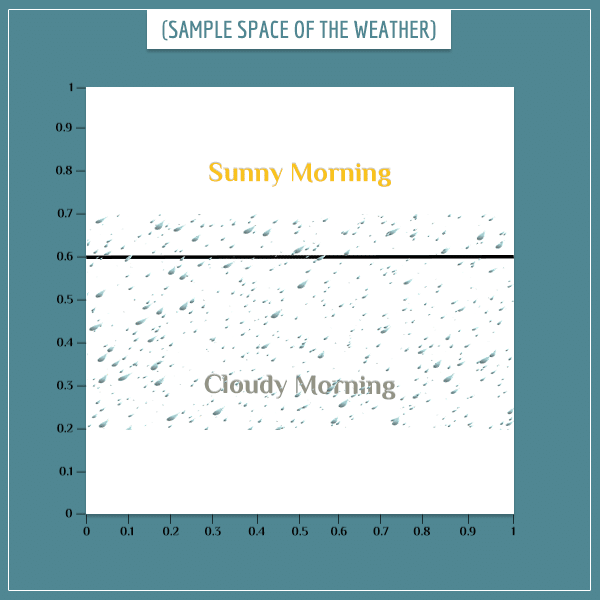 Joint sample spaces represent probabilities of combinations of outcomes of two or more uncertain processes. In the current example, there are two such processes:  type of day (rainy/dry) and the type of morning (cloudy/sunny). The 4 possible combinations are:

As you have guessed, the parts of the square marked with rain drops represent rainy days. Don’t worry about the fact that the area for dry day is split. All that matters is the total area that each event covers. In this case, both “Rainy Day” and “Dry Day” cover exactly one half of the area of the square.

Suppose you see that the morning is sunny and want to calculate the probability that the day will be rainy. Well, here is the sample space for P(“Rainy Day” | “Sunny Morning”): 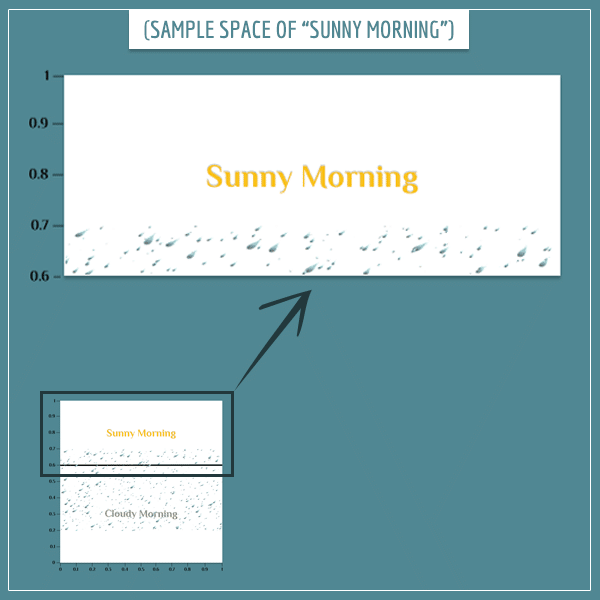 In the same, way you can calculate the probability of rain when the morning is cloudy:

As an exercise, you can try calculating the remaining conditional probabilities using the same graphical method.

The sample space (possibility space) is the set of all possible outcomes of some uncertain process. All possible non-overlapping events are like the tiles that cover the sample space. Also, one event may cover more than a single outcome (like the event of rolling an even number with a 6-sided die, which consists of the individual outcomes of rolling 2, 4, or 6).

If you’re new to the topic, I hope you found this post easy to follow. Understanding sample spaces gives you a toolkit for getting your head around more complicated concepts in probability theory, both formally and on an intuitive level.

I use a lot of the ideas and intuition in this post in another post where I show the derivation of Bayes’ theorem. Be sure to check it out!