In my post introducing the inverse problem I showed a way to address it using Bayes’ theorem. As a quick reminder, you’re facing the inverse problem when you try to infer the possible cause of a particular set of observations. One way to do that is by forming a hypothesis for each possible cause and then apply Bayes’ theorem to update its probability from additional information.

If you think about it, solving the inverse problem is a big part of the scientific process in general. When scientists make observations in their domain of interest, they want to explain them. Consequently, they form hypotheses for their possible causes and collect evidence to evaluate their plausibility with various statistical methods. As I already mentioned, Bayesian statistics is one of the two major frameworks used for this purpose. The other framework goes by various names:

The term Fisherian statistics comes from the English statistician Ronald Fisher. However, the framework for hypothesis testing used today is an incidental combination between his approach and that of two other major figures in 20th century statistics: Jerzy Neyman and Egon Pearson.

The rest of this post is dedicated to explaining the logic of the framework. From here on I’m going to use the term Frequentist statistics because I think it’s most representative of the framework’s spirit.

If you would like to know more about the distinction between Frequentist and Bayesian statistics, check out this post where I give a detailed comparison.

Imagine you want to test the hypothesis that sleeping less than 4 hours impairs people’s memory.

You design an experiment where you randomly divide a number of people in 2 groups. All participants in the experiment learn a list of 100 words from a foreign language and a few hours later go to sleep under your supervision. Then, you wake them up 4 hours (Group 1 participants) or 8 hours (Group 2 participants) after they’ve fallen asleep and ask them to write down as many words from the list as they can remember.

Finally, you calculate the average number of remembered words for each group and you get the following results: 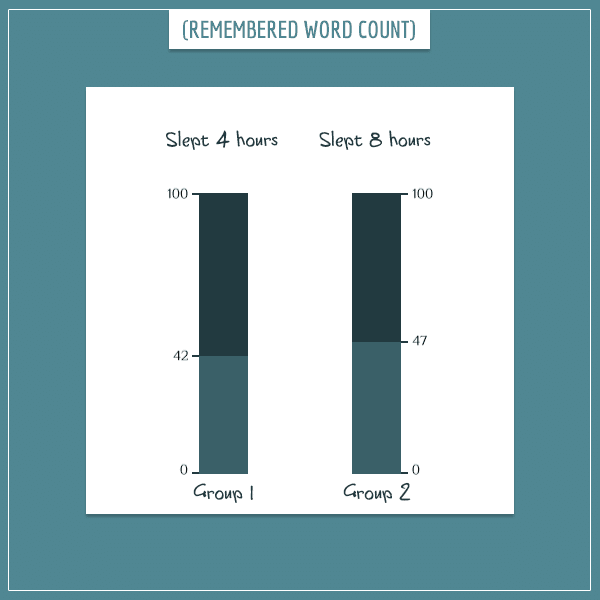 People who slept 8 hours, on average, remembered 5 more words than people who slept 4 hours. Does this support your original hypothesis? Maybe. Consider these possible causes of the observed difference:

In a Bayesian framework, you would treat this as an inverse problem and calculate the posterior probability of your original hypothesis, given the data from your experiment.

But in the Frequentist framework, you’re not interested in calculating probabilities of hypotheses being true. Instead, you want to calculate the probability of observing the 5-point or greater difference, if you assume that your hypothesis is wrong and there should actually be no difference between the groups.

Pause for a second and read the last sentence again. This probability is at the core of Frequentist hypothesis testing. This is what statisticians in the framework call a p-value.

The assumption that the real difference between the groups is equal to zero also has an official term in statistics: the null hypothesis. Тhe p-value is the conditional probability of observing a deviation from the null hypothesis which is greater than or equal to the one you actually observed. In the example above, this would translate to:

No. As I said earlier, in the Frequentist framework you’re not in the business of calculating probabilities of hypotheses. Instead, you want to use the p-value to make a decision about rejecting or not rejecting the null hypothesis. Here is the general procedure:

The most popular threshold value is 0.05 and was first suggested by Fisher himself. He didn’t really have strong mathematical arguments for choosing this value but it stuck anyway. And to this day, it’s the “official” minimum level of significance for rejecting a null hypothesis (although some fields may require much lower thresholds).

This procedure guarantees that, if you applied it consistently to all null hypotheses that you test, in the long run you will falsely reject at most 5% of the correct ones.

Imagine you’re a scientist and you regularly apply the two-step procedure above to test various null hypotheses. In your lifetime you’ll manage to test a certain number of hypotheses. Some of them you will reject and others you won’t.

Here’s a visual metaphor for the list of all null hypotheses you will ever test: 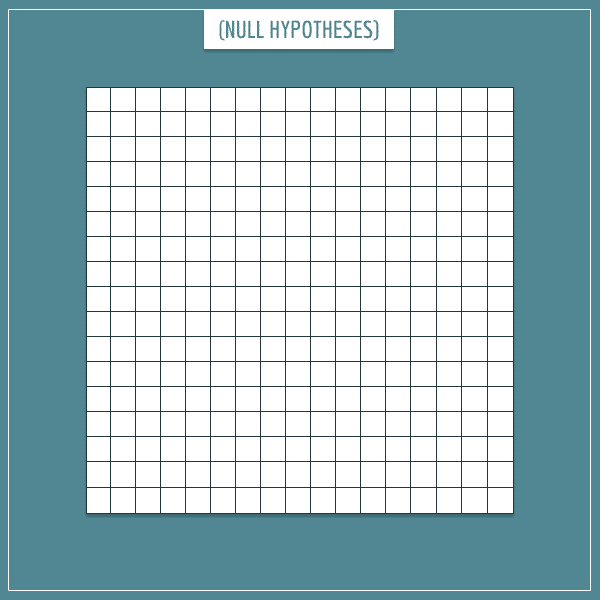 In this image, each small square represents a null hypothesis. Some of these are true and some are false, but you obviously don’t know which ones are which. Every time you “grab” one of the null hypotheses from the “bag”, you go through these steps:

Illustration of the procedure

Say you’re in the middle of your career and you’ve managed to test a certain number of null hypotheses. In order to keep track, you color the ones you rejected and the ones you didn’t reject differently. Right after, you throw them in a metaphorical pool of “tested null hypotheses”: 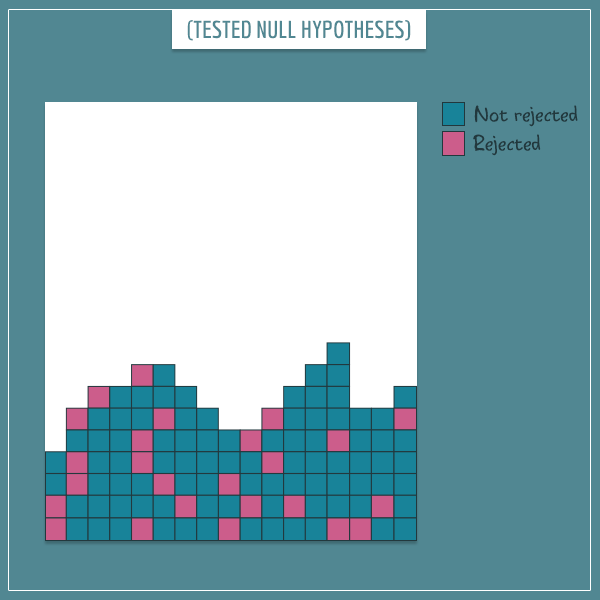 You have rejected some of the null hypotheses and failed to reject others (most of them). Ideally, you want to reject all incorrect hypotheses and leave the correct ones alone. But you will inevitably make some errors in the process.

Your goal is to minimize the 2 types of possible errors that can occur:

This is the official terminology used in Frequentist statistics. But you might have come across the same errors under the labels “false positives” and “false negatives”.

To illustrate what this really does, imagine that there is some omniscient being who knows exactly which null hypotheses are true and which are false. If you asked that being to separate the true from the false ones, the result might look like this: 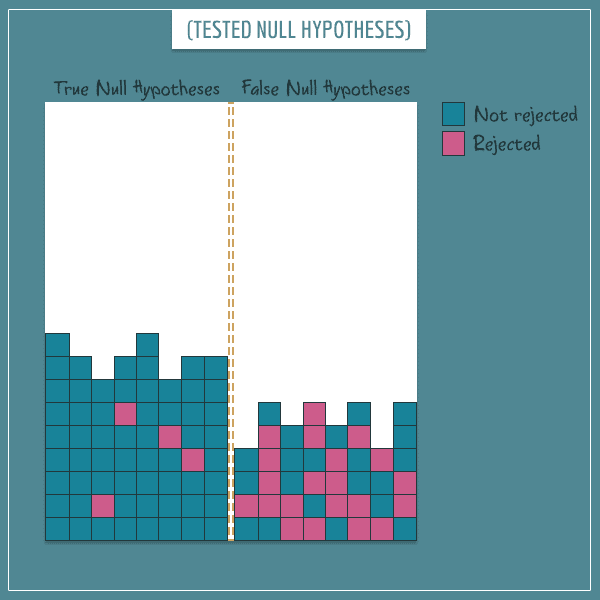 Examine the last image closely because it’s the most important one in this post.

The type I error

First, focus only on the squares on the left side. They stand for the true null hypotheses among the ones you tested.

You see that you rejected a very small percentage of them. As you continue to test more hypotheses, the number of squares on the left will continue to grow. But the percentage of red squares will never exceed 5% (assuming your calculation of the p-value is correct, of course).

So, the type I error rate is simply:

Similarly, the type II (false negative) rate, which is usually denoted with the greek letter β (beta), is the percentage of false null hypotheses that you failed to reject.

Now, only focus on the squares representing false null hypotheses (those on the right). The type II error rate is simply:

Another way of defining β would be as:

If you count the red squares instead, you get the related concept of statistical power:

In other words, it’s the probability that you will reject a null hypothesis, if it is false.

A question you might be asking yourself is: “If the p-value controls the false positive rate, what controls the false negative rate and statistical power?”. This would actually be a topic for another post but the short answer is that controlling the size of β isn’t as straightforward as controlling the false positive rate. The false negative rate will depend on 3 factors:

In the real world, you only have control over the last factor, so you see why controlling the type II error is much trickier.

You performed the memory test and discovered people in your experiment who slept 8 hours remembered 5 more words than people who slept 4 hours. Say you calculated the p-value to be 0.035. This is less than 0.05, so you label the 5-word difference “statistically significant” and reject the null hypothesis. What follows from here?

This time it happened to be 5 but if you performed another experiment you might get 4, 6, or any other value. These fluctuations are due to random factors like the ones I listed earlier (such as random differences in memory/linguistic skills of people in the two groups). Of course, deviations further away from the real value become less and less likely.

This point is extremely important because ignoring it leads to some common misinterpretations of p-values.

The important concepts I talked about in this post are:

This procedure controls the long-term type I error rate while also giving the opportunity to limit the type II error rate (β). However, there are no guarantees for the latter because it strongly depends on the size of the effect (deviation from the null hypothesis), if it exists.

This is the gist of it but the real procedure is much more complicated. I haven’t said anything about how p-values are actually calculated. There are many statistical methods for that, depending on the experimental design, the number of groups, the type of hypothesis you’re testing, and so on.

I will cover these and other questions in future posts.